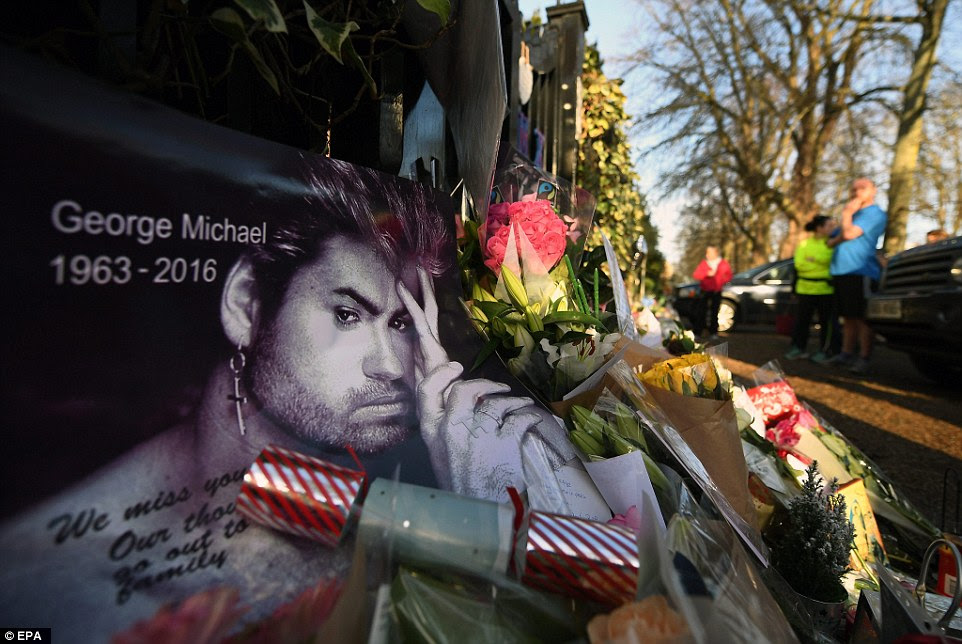 One fan created an image of George, featuring his birth and death year, and wrote a message saying: 'We miss you. Our thoughts go out to your family'
George Michael's family thank grieving fans as they write messages on Range Rover outside his home | Daily Mail Online
Read more: http://www.dailymail.co.uk/news/article-4068514/Grieving-fans-write-messages-Range-Rover-outside-George-Michael-s-home.html#ixzz4U47DaBCe
Follow us: @MailOnline on Twitter | DailyMail on Facebook

A photograph of British singer George Michael is seen among floral tributes and candles outside Michael's north London home on December 26, 2016, after news of the singer's death broke. Tributes poured in from the music world on December 26 after British pop superstar George Michael, who rose to fame with the duo Wham! and a string of smash hits including “Last Christmas”, died aged 53. Michael died of apparent heart failure on Christmas Day at his home in Goring, a village on the River Thames in Oxfordshire, west of London, after an award-winning career spanning more than three decades. (Photo by Daniel Leal-Olivas/AFP Photo)
The Day in Photos – December 27, 2016
http://avax.news/fact/The_Day_in_Photos_December_27_2016.html
張貼者： C.H. Lin 於 上午10:50